From Chronic Fatigue to Lyme: Medically Unexplained No More

Over the past year, forces at the highest reaches of medicine have made ever stronger efforts to burden the sick, diseased, and infected with psychiatric labels, consigning them to often mind-numbing psych meds and untreated infection, immune dysfunction, and pain. Some critics see this as psychiatric abuse at the hands of non-psychiatrists --since it is rarely psychiatrists, but rather, those in other specialities who step outside the circle of their training to impose these crude diagnoses on the medically ill.

The above is a quote from Pam Weintraube in Psychology Today
http://www.psychologytoday.com/blog/emerging-diseases/200910/chronic-fatigue-lyme-medically-unexplained-no-more

Pam has written some very in depth articles on Lyme Disease, links into some of her articles are on my side bar under Lyme Disease.

I would really like to copy the whole article but hope you will take the time to go to her article through the above link and read it yourselves in full. I expect there will be someone you know who has been labelled with a psychosomatic illness when now there is evidence that it could be a physical illness.

Further quotes from her article.

Other scientists in favor of restrictive treatment for Lyme disease have burdened women in particular with the stigma of psychiatric disease --contending that Chronic Fatigue Syndrome, chronic Lyme disease, and depression may really be one and the same. Gary Wormser and Eugene Shapiro, an infectious diseases doctor and a pediatrician respectively published the proposal in the Journal of Women's Health in 2009, despite lacking psychiatric training themselves.

When it comes to stigmatizing the sick, why let science interfere? Indeed, this past week the American Association for the Advancement of Science reported in its prestigious journal, Science, that 68% of chronic fatigue syndrome patients were infected with a new retrovirus, called xenotropic murine leukemia virus-related virus, or XMRV. (Just 3.7% of healthy people are infected) A follow-up study, also reported in the Science, raised the number of CFS patients infected with the retrovirus to 98%, in all.

Brian Fallon of Columbia University, has this to say about so many diseases presenting in similar ways: "Those who say that the patients with MUS (medically unexplained symptoms) have a purely psychological illness are missing the point about the commonality of these syndromes," he states. "The key element is that these illnesses share symptom profiles because these symptoms represent an abnormally perpetuated physiologic response. For example, it is well known that elevated proinflammatory cytokines produce these symptoms; also well known is the fact that depression can be a by-product of such an elevation because certain cytokines reduce the conversion of tryptophan to serotonin in the body.."

“Despite the effort to keep patients running on empty, science is moving on. “I think this establishes what had always been considered a psychiatric disease as an infectious disease,”Judy Mikovits, the scientist leading the retrovirus work at the Whittemore Peterson Institute in Reno, said this week in the New York Times.

Hillary Johnson, the author of Osler's Web: Inside the Labyrinth of the Chronic Fatigue Syndrome Epidemic, has said it best in her blog:"A nova has appeared in the constellation. We knew it would appear some day-but in our lifetimes? Many of us, having given up on recovery, had merely hoped we might live long enough to understand the scientific basis of our suffering. Thousands, perhaps hundreds of thousands, of us didn't make it, or simply gave up. Between the time Dr. Judy Mikovits of the Whittemore Peterson Institute and her collaborators at the National Cancer Institute and the Cleveland Clinic submitted their paper to Science and today, we know at least one woman, the British citizen Pamela Weston, chose assisted suicide rather than go on; in the note she left behind she wrote that she hoped her choice would, in some part, move the UK medical research forward. Might Weston have hung on had she known about XMRV? We grieve for those who couldn't wait, couldn't hang on, and acknowledge their bravery. For the rest of us, this is a day to celebrate"
I urge everyone to read this as well as Johnson's prior post, a copy of a speech she recently gave in London in May 2009.

Pamela Weintraub is a senior editor at Discover Magazine and author of Cure Unknown: Inside the Lyme Epidemic, first place winner of the American Medical Writers Association book award, 2009. A revised, updated PAPERBACK version of Cure Unknown will be published October 13, 2009. The update covers the topic here, and is available on Amazon for a little over $10.
--------------------------------
Many thanks Pam for all your efforts in fighting our corner.
I will close with a sunset picture in the hope that not too many suns will set before the medical world starts to listen to what patients are saying. 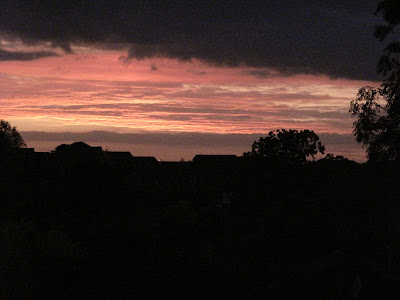