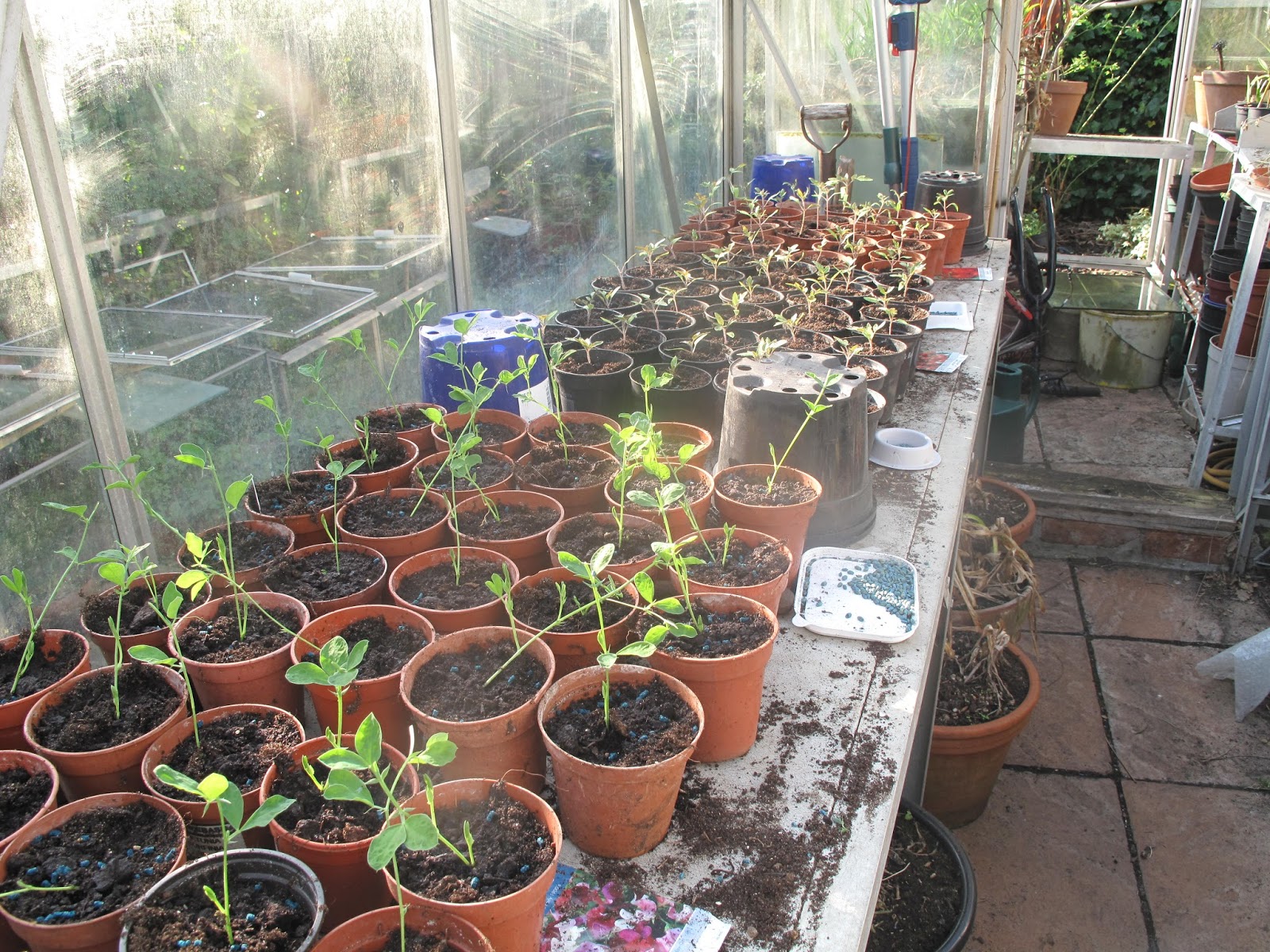 This time of year the greenhouse changes within days. Above are sweet peas and Tomato plants which I started indoors on a window sill and then moved to the back lean to once they germinated and later into the greenhouse. 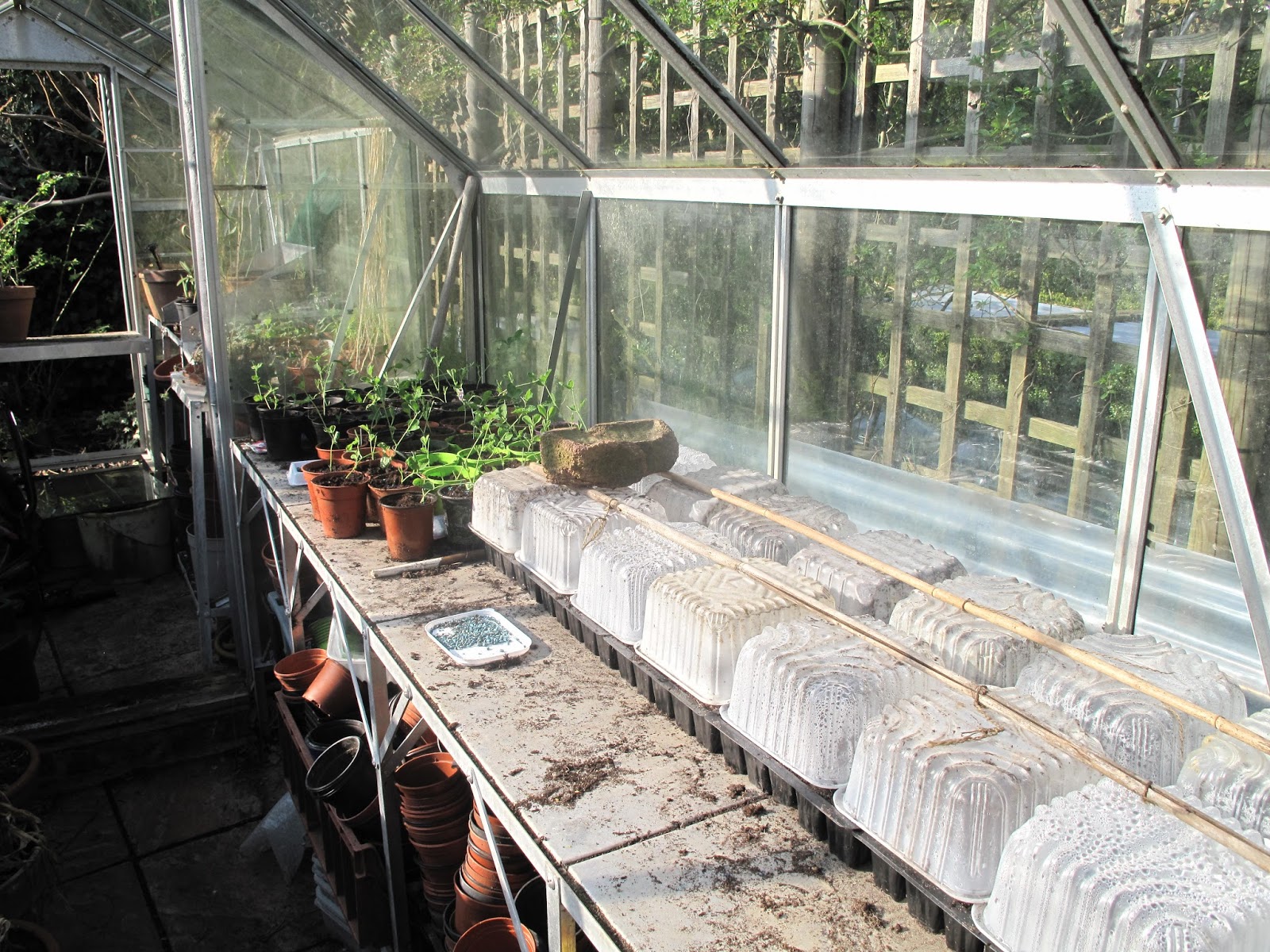 This bench has peas under the plastic protecting them from Mice or rats which would eat the lot if they had chance, they have consumed several trays of rat poison nightly for over a week. And before you feel concern for the rats and mice, we are plagued with them and as someone suffering already with Lyme Disease I recognise the risks of them bringing ticks and infections into my garden and passing onto my family. Although already infected with Lyme it won't stop added infections adding to the load. Rats and mice are recognised as vermin and ticks will infect the next animal they have a blood feed off a bit like natures dirty needle. 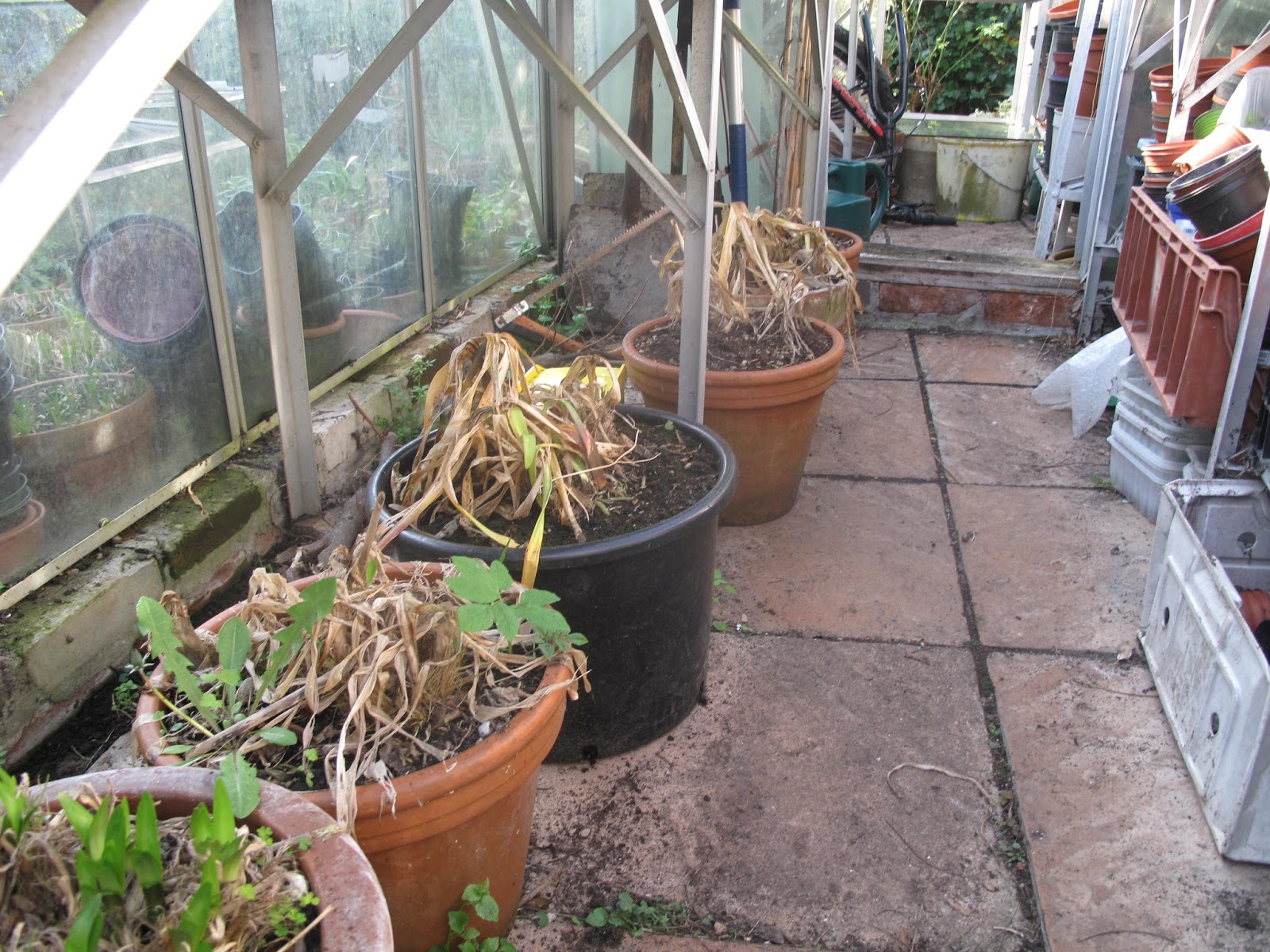 These poor sad looking agapanthus were left outside this winter in all the cold and it was a mistake. Although I brought them into the greenhouse belatedly I am hoping they might survive and grow again. Usually I store all my Agapanthus in a cold greenhouse but I was encouraged to leave them out in the hope that the cold would encourage more flowers. I think not, I suspect I need to make a point of feeding the pots once a week to encourage flowering. I must also get rid of the ground elder I can see in one pot as well as the dandelion. There's nothing like adding photos to a blog to realise just how many more jobs you have to do although sitting at a computer gives my back and joints a much needed rest. 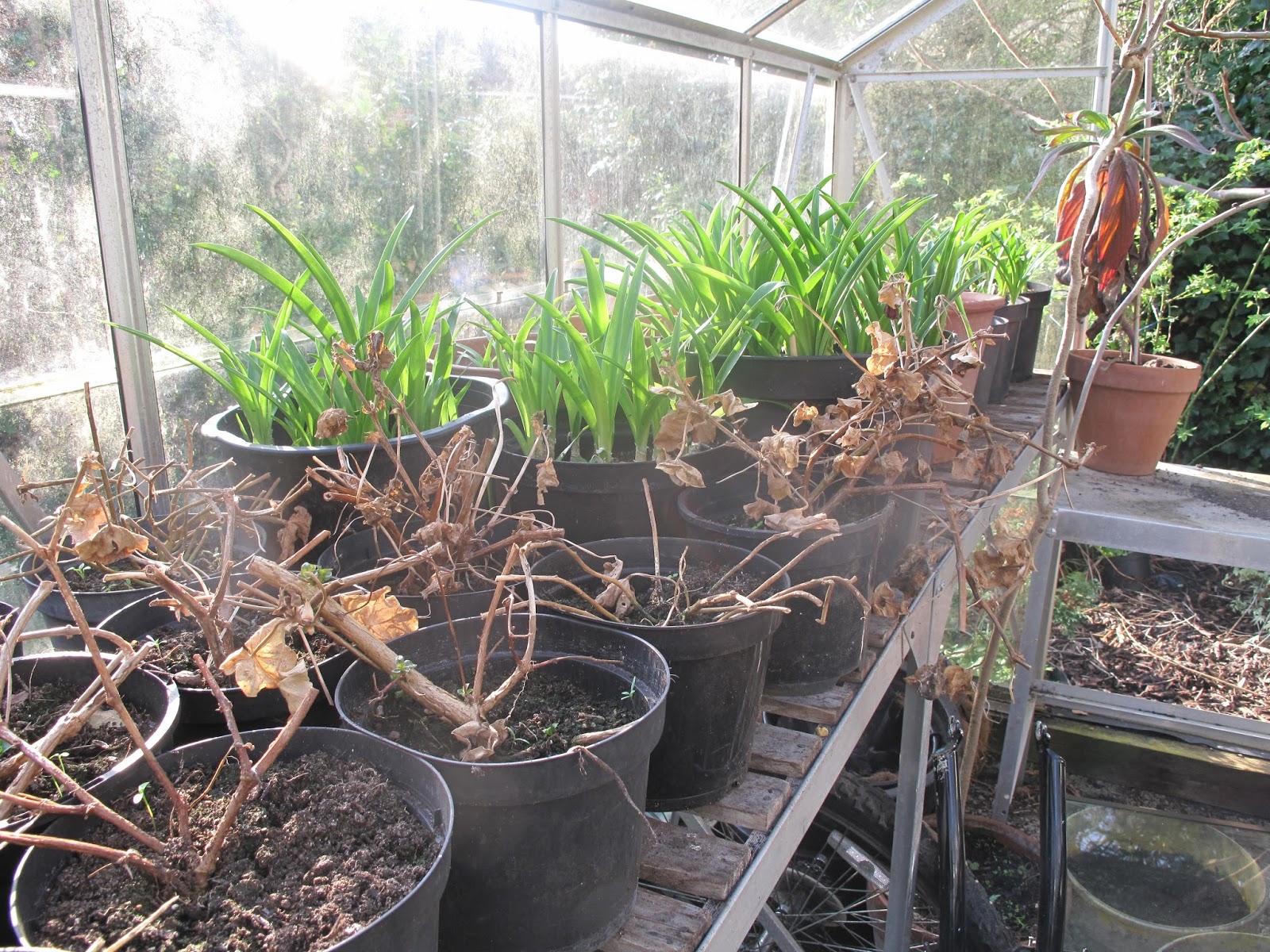 These are plants left from last years hanging baskets in the hope that some might grow but the last cold spell was too much and only one or two fuschia and one petunia have survived. 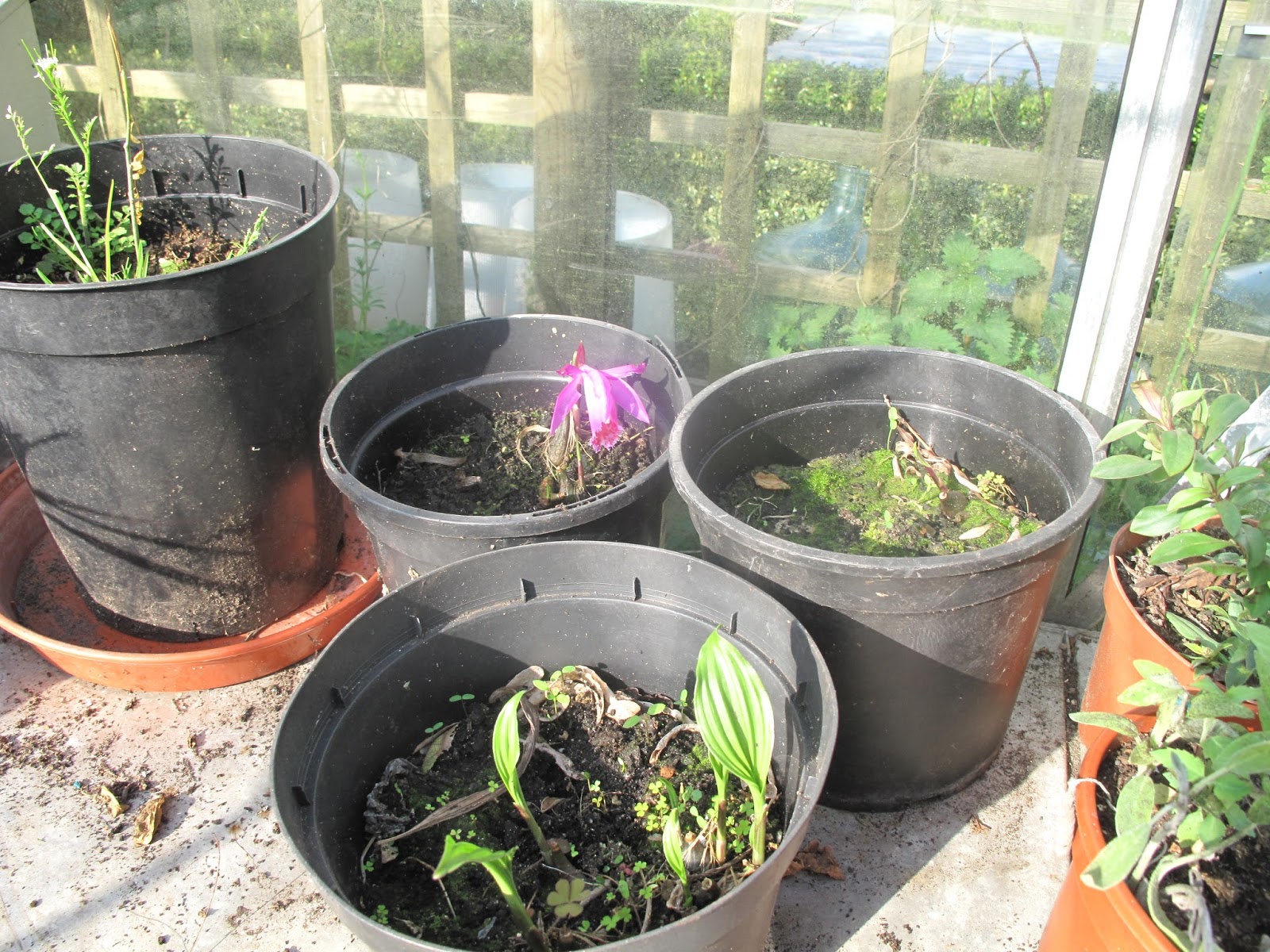 One self sown tree but I am not sure from what maybe Gleditsia maybe something else I had years ago. Rather poor specimens of Pleione must try and look after them better. 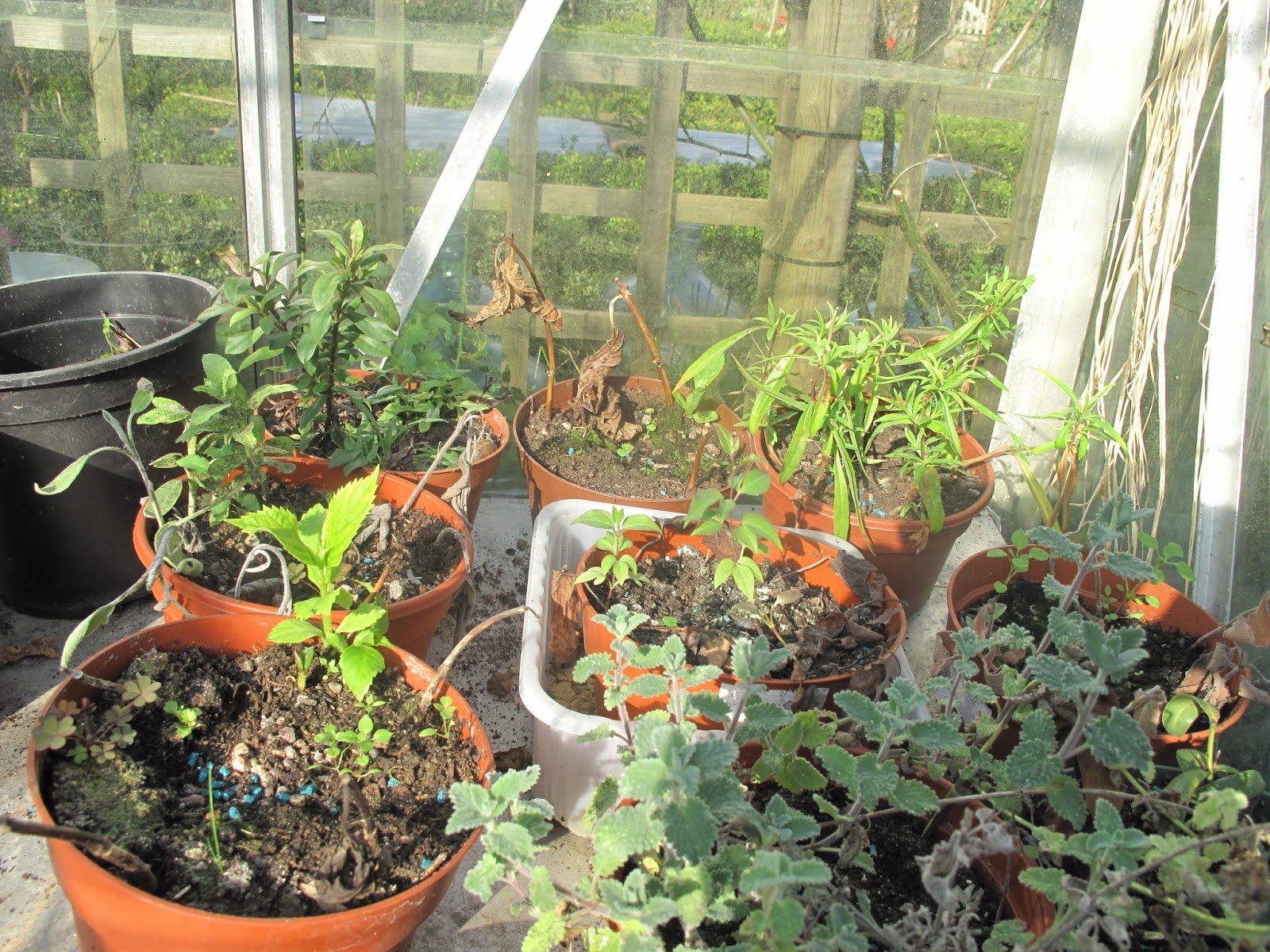 A collection of cuttings from last year two clematis, two Hydrangea and others. 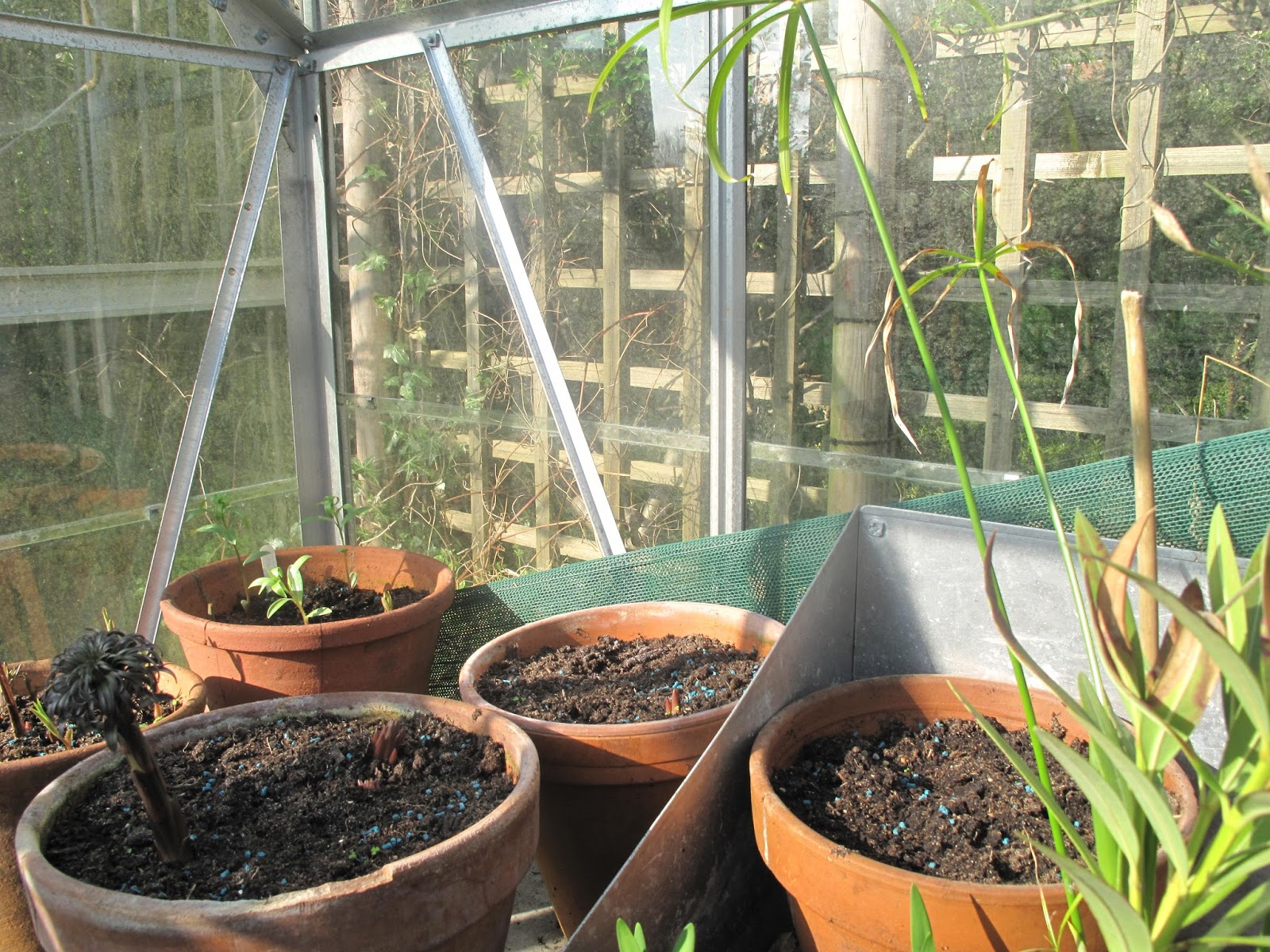 Regale Lilies my favourite if the Lily beetle doesn't devour the lot, still it is worth adding to my collection each year so I can enjoy their wonderful flowers and smell, I move the pots to the front and back patios so the smell can waft indoors as well as being enjoyed when you walk by. 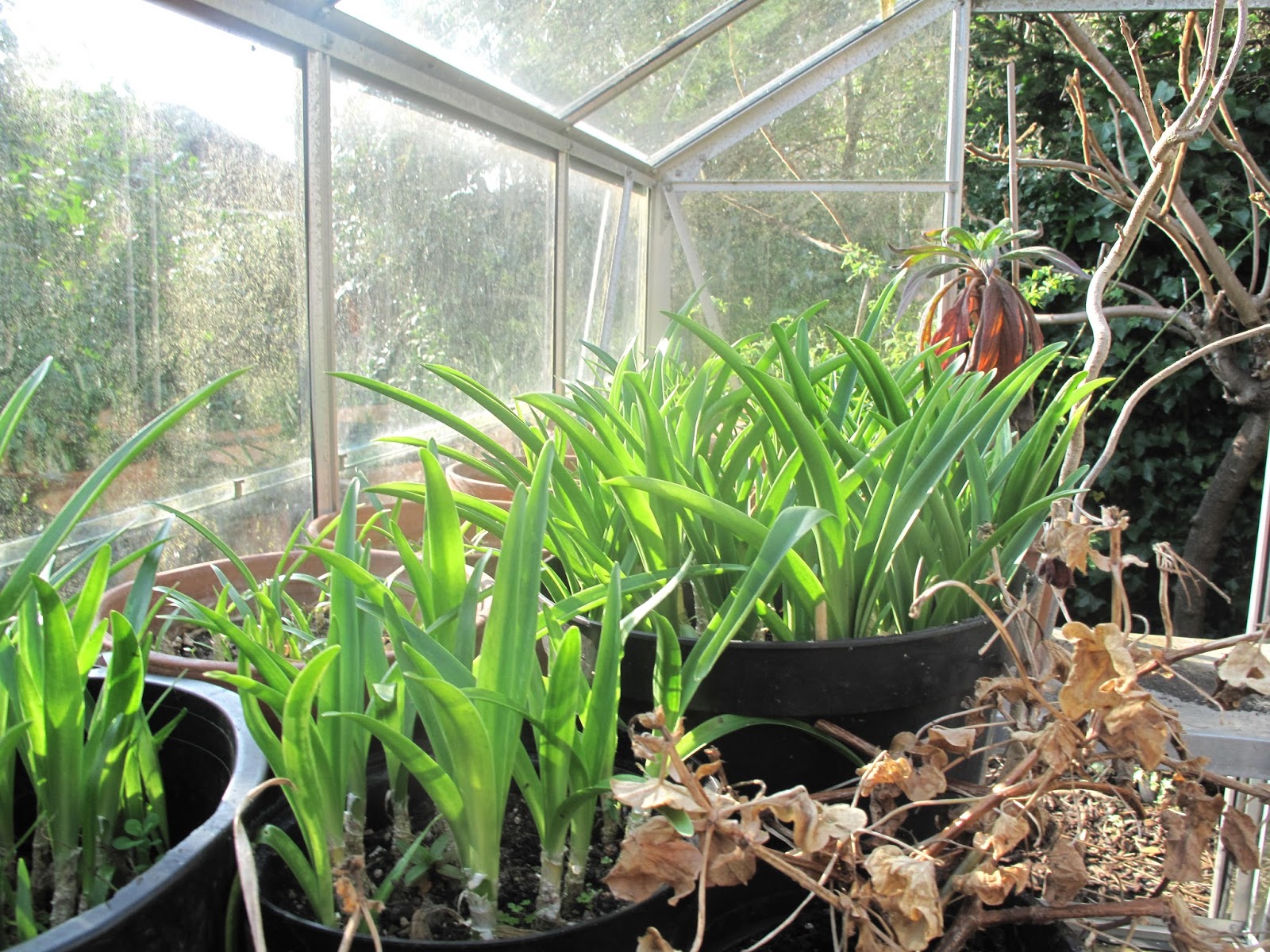 Nerine Bowdenii which I leave in the greenhouse during the winter and then will sit outside later. Hoping for flowers in the Autumn. 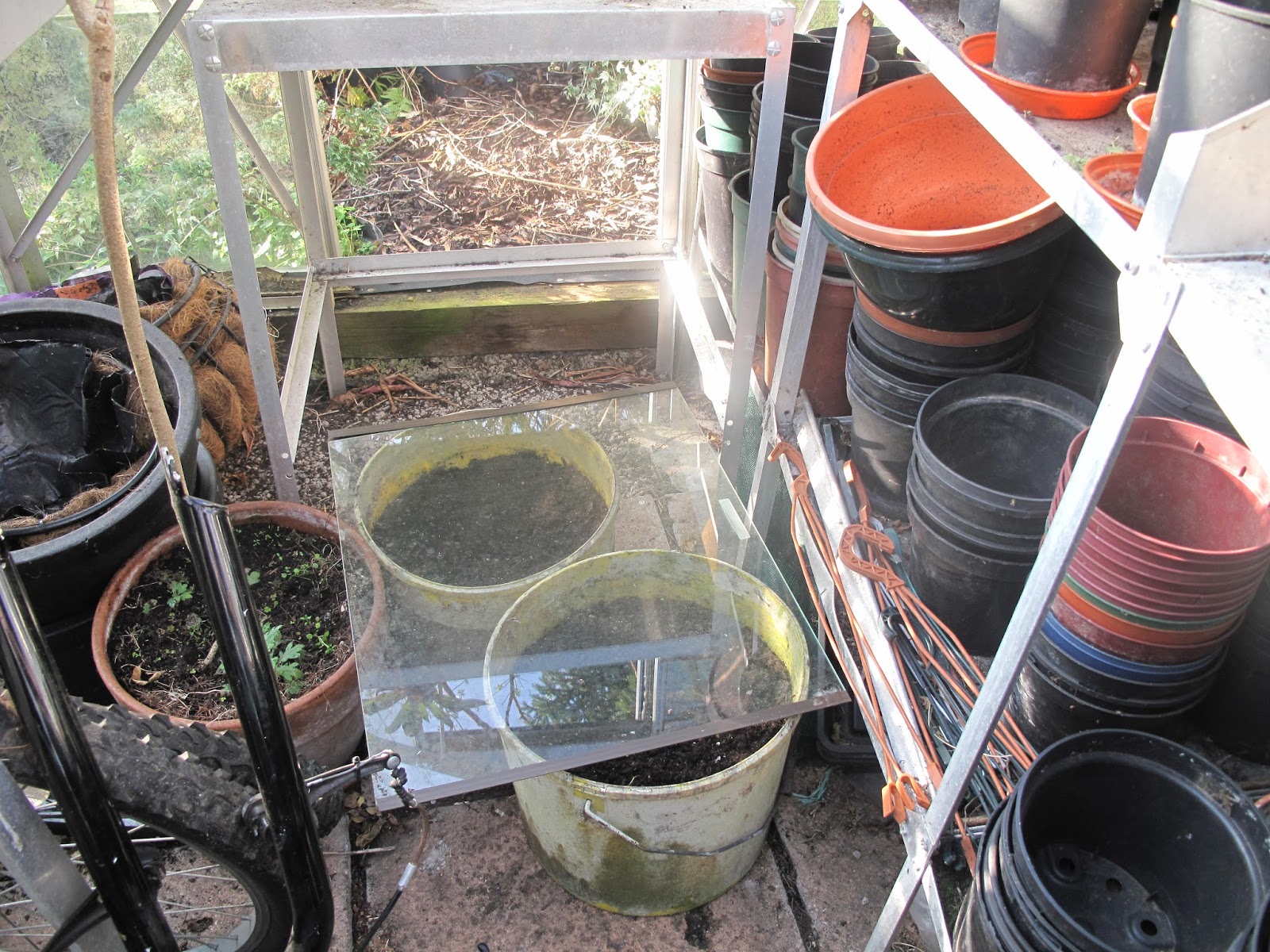 Leeks sewn in buckets and encouraged by the glass to germinate. The bits of bicycle are not rooting although one would expect so, they were put there temporarily over six months ago but will have to go soon as the tomatoes will go there when they are big enough. 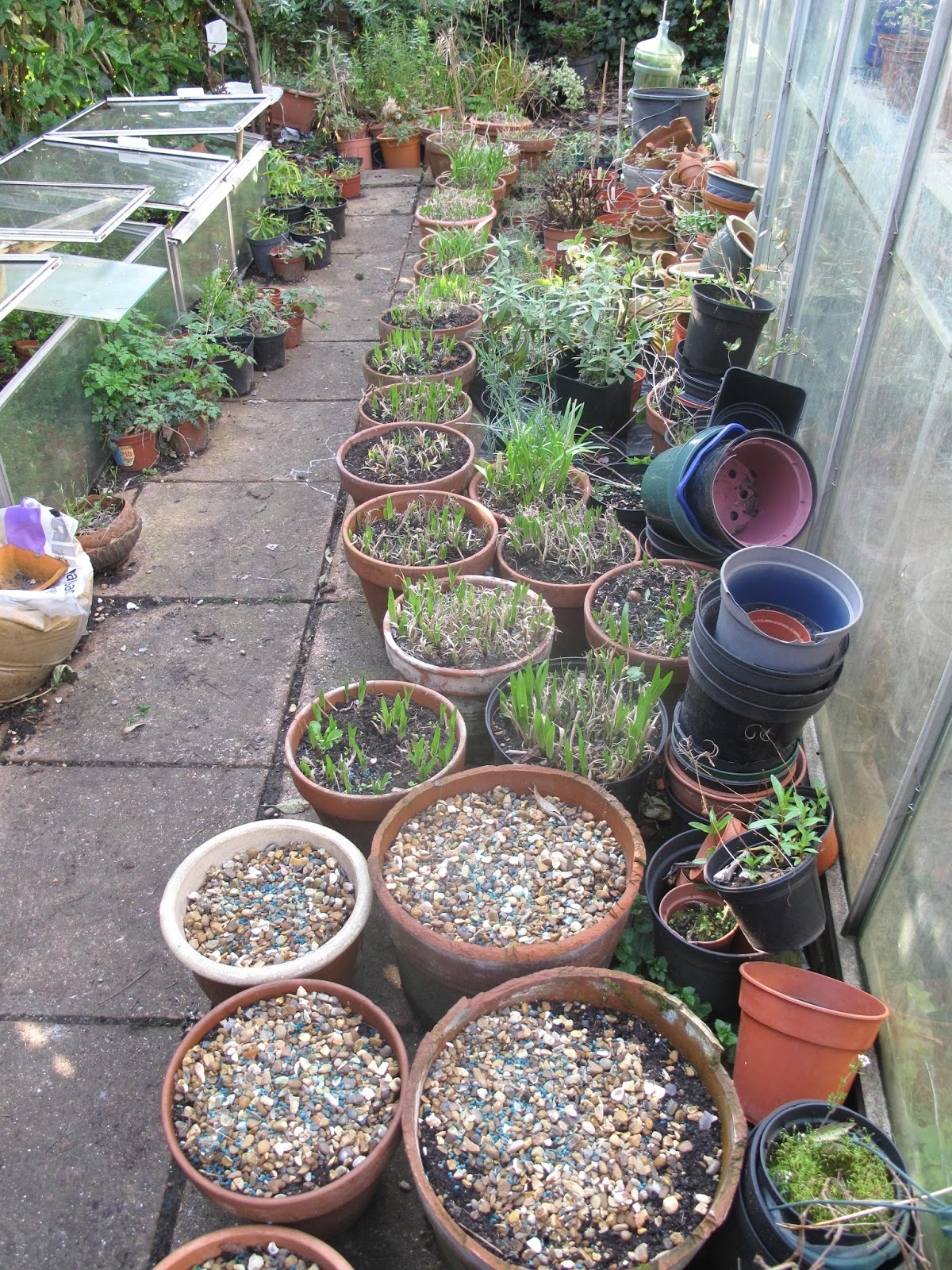 Agapanthus are mainly moved outside now it's April making room for other things in the greenhouse. Also pots of Hostas as I have split most of my hostas this year. 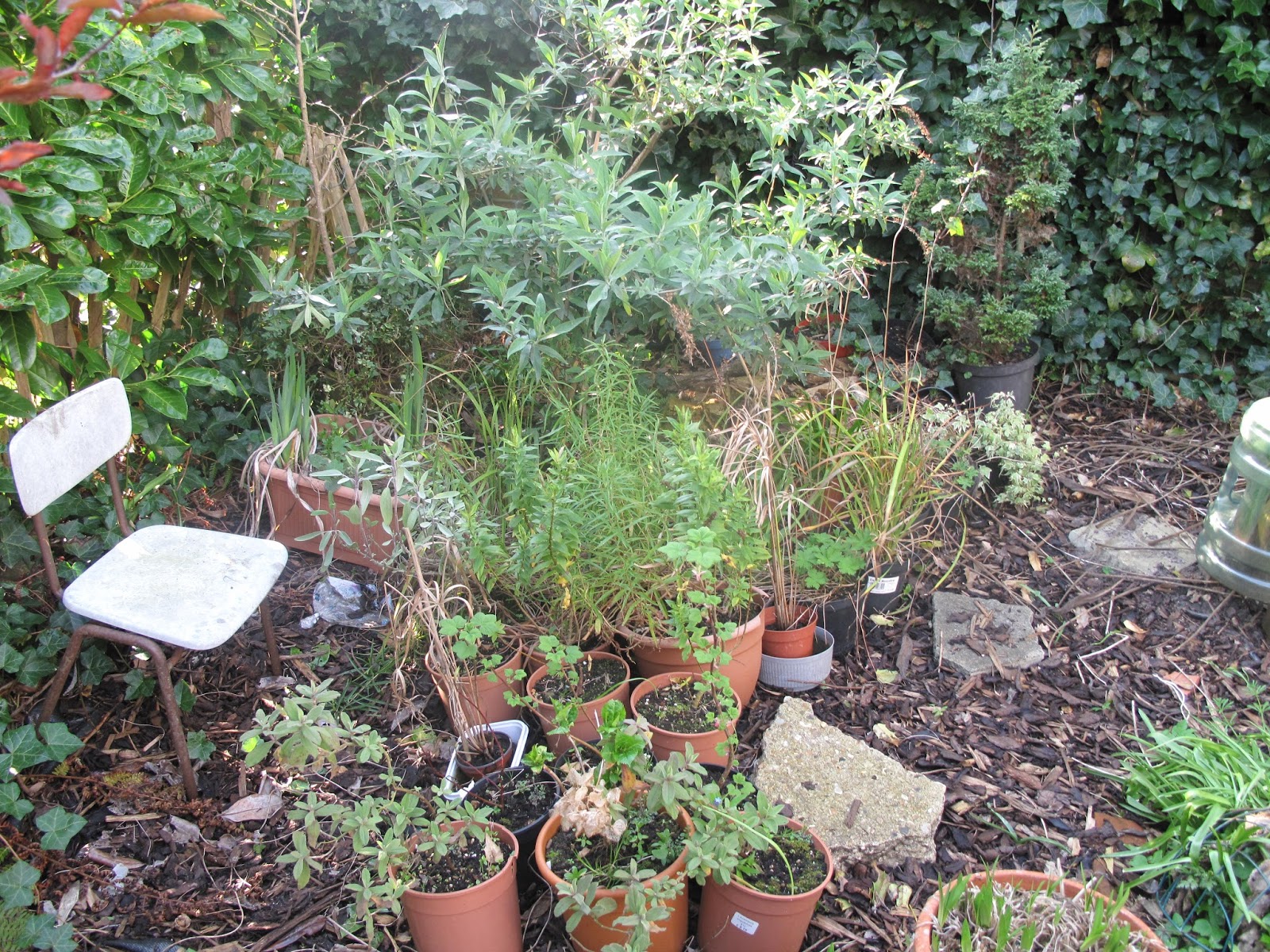 More pots of cuttings make this area a bit more interesting. It was covered in ground elder and because of various permanent trees growing and rubble I decided a couple of years ago to cover in weed suppressant material and then bark. It has worked very well and makes one less job for me in the garden as well as provide extra space for many pots. 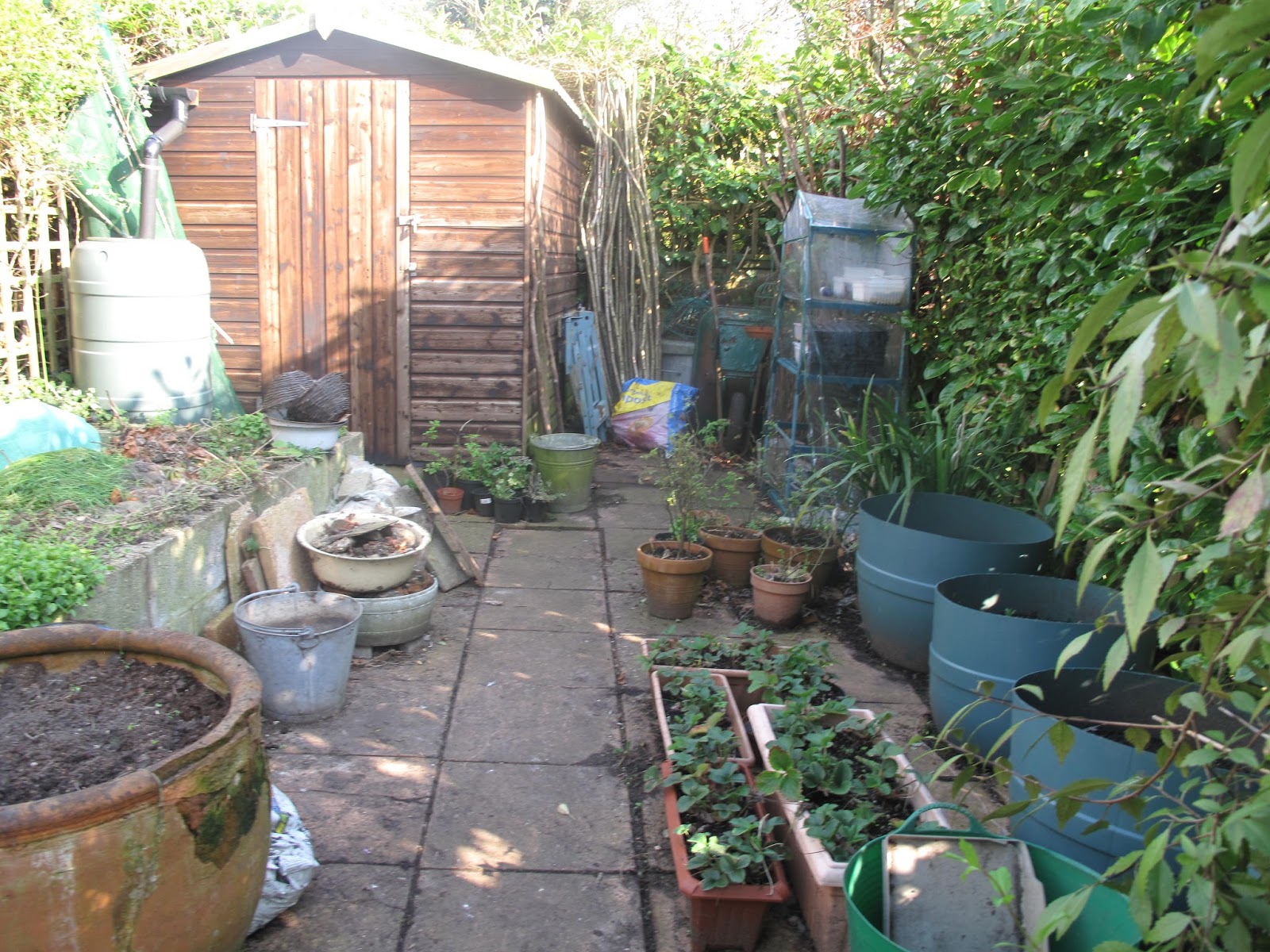 My working area and strawberries also the four half barrels make really useful places to grow Sweet Peas giving them some shade as they don't cope with full sun all day. Because I like to cut Sweet Peas for the house I decided long ago they were not something best grown in a herbaceous bed. 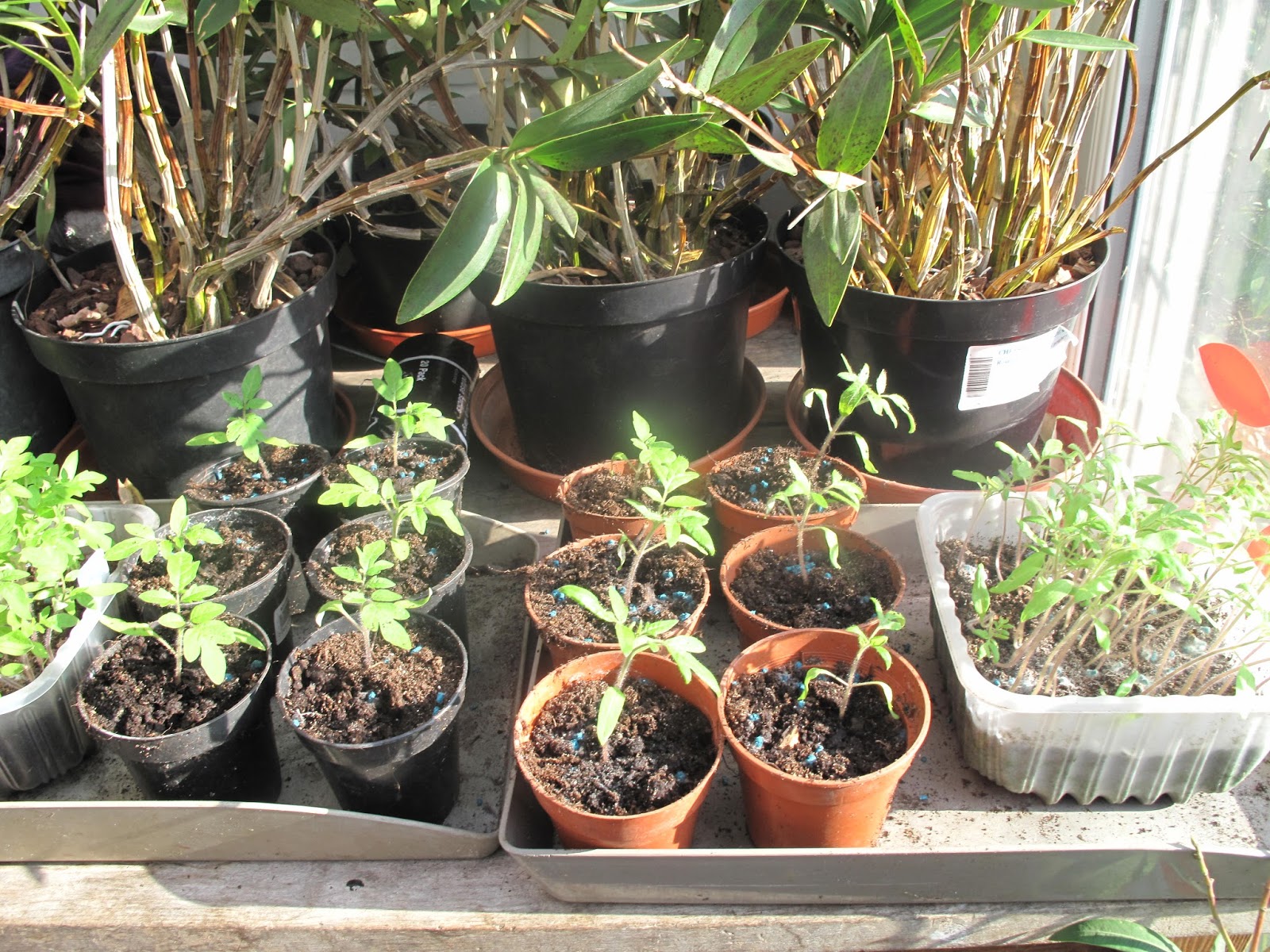 A few more tomato plants and in trays left in the lean to in case a late frost wipes out ones in my greenhouse which has happened in past years.
Posted by Joanne at 11:37